Update: AirAsia informed the Stock Exchange of Thailand on March 6 that it has withdrawn its offer to purchase Nok Air shares.

Though both firms have yet to confirm the deal, Trade Competition Commissioner Santichai Saratawanpad said any merger would require the permission of his office first. An unauthorized merger could be considered a monopoly and subjected to an initial fine of 200,000 baht plus additional fines of 10,000 baht per day, he said.

“The Trade Competition Commission has instructed its agency office to monitor the business merger of these two airlines closely,” Santichai said in a statement. “If we detect any violation of trade competition, we will punish them strictly and immediately in accordance with the laws.”

Santichai said AirAsia’s potential buyout of Nok falls under antitrust regulations because it involves a company with revenues of over 1 billion baht. Monopolies are illegal in Thailand under a 20-year-old law, but not one case has ever been successfully blocked.

In recent days the trade floor at Stock Exchange of Thailand has been awash with speculation about AirAsia’s plans to buy a majority stake in Nok from the Jurangkool family. Nok shares have increased in value by 42 percent since word of the takeover came out last week, up from 2.28 baht to 3.24 baht per share on the Thai exchange.

The Jurangkools own 53 percent of the airline’s shares, while national carrier Thai Airways is its second largest investor with a roughly 16 percent stake.

Operating out of Don Mueang Airport, low-cost carrier Nok Air has reported financial losses for the past several years as it has been beset by chronic delays and pilot strikes. The company released a statement earlier this week denying a takeover was imminent.

“The company would like to clarify that the company has not received any information about the aforementioned investment as reported in the news,” the airline said Monday.

But a statement from Asia Aviation, the owner of AirAsia, confirms it has put an offer on the table.

“The company is deliberating on the viability of the aforementioned investment, but no written agreement has been made, and there has been no action binding the company into buying or selling shares of Nok Air,” the Asia Aviation statement said.

CJP members will benefit from reduced fuel prices and fees at all Signature locations in North America.

The agreement calls for custom fuel pricing for CJP member aircraft at Signature’s 140 FBOs in North America. Pilots will also be automatically enrolled in the Signature TailWins rewards program, allowing them to earn points on fuel purchases and redeem them for cash or gift cards. As part of the agreement, CJP members who enroll in the TailWins program will earn five times the points on all fuel purchases in the Signature North America network for one month and are eligible for future promotions, Signature said.

“We could not be more excited to partner with CJP and welcome its 1,000-plus members to the Signature network,” said Shawn Hall, chief commercial officer for Signature Flight Support. “This agreement represents a great option for aircraft owner/operators to benefit from the Signature network and to experience our differentiated service offerings. Signature will continue to offer similar programs to industry partners as we extend our brand offerings to the business and general aviation industry.”

CJP members aren’t required to visit a Signature FBO if there is one at the airport, but the price breaks will make it worth it for them, the association said.

”CJP is committed to bringing additional value to CJP members through operational discounts,” said CJP CEO Andrew Broom. “This agreement with Signature Flight Support allows our members to enjoy reduced fuel and fee costs at Signature’s facilities. We look forward to expanding our member benefits with the addition of the stellar team at Signature and a vast network of FBOs throughout the U.S.”

Dozens of airlines have voluntarily grounded the jetliner as investigators scramble to determine the cause of the second deadly crash of the type in less than five months.

More than two dozen airlines around the world have grounded their fleets of Boeing 737 Max 8 jetliners after the second deadly crash of the type in less than five months. A number of countries have also banned the airplane from operating in their airspace as crash investigators work to determine what may have caused the nearly brand new Ethiopian Airlines jet to crash minutes after takeoff from Ethiopia’s Addis Ababa Airport on Sunday, killing all 157 people on board.

It was an eerie repeat of a similar crash involving a brand new Lion Air 737 Max 8 in Indonesia on October 29, which claimed the lives of 189 passengers and crew. So far there is no indication that the causes of the crashes are related, but the circumstances are similar enough that many of the jetliners are being grounded even as Boeing stands behind the model.

The UK’s Civil Aviation Authority was the latest to ban the jetliner from operating in or over its airspace “as a precautionary measure.” The move follows bans in the past two days of the 737 Max 8 by China, Australia, Indonesia, Malaysia, Singapore and Oman as 25 airlines have also opted to voluntarily ground the airplanes. U.S. airlines that operate the 737 Max 8, including American and Southwest Airlines, say they will continue to operate the model as they monitor developments.

A focus of investigators in the crash of Ethiopian Airlines Flight 302 will almost certainly include the 737 Max 8’s maneuvering characteristics augmentation system (MCAS), an anti-stall protection technology that reportedly issued faulty angle-of-attack readings in the October crash of Lion Air Flight 610. Boeing yesterday announced that it has been working on a flight control software upgrade for the system, partly in response to the Lion Air crash, that includes updates to the MCAS flight control law, pilot displays, operation manuals and crew training. The upgrade is expected to be deployed in the next few weeks and likely will be the subject of an FAA airworthiness directive. For now, the FAA says it lacks sufficient evidence to ground the 737 8 Max.

In the Lion Air crash, the crew experienced an unexpected nose pitch down shortly after takeoff as the aircraft was passing through 5,000 feet. MCAS and angle of attack error messages were discovered by investigators, prompting the FAA in November to issue an emergency airworthiness directive for the 737 Max 8 noting “erroneously high single angle of attack (AOA) sensor input could result in repeated nose-down trim commands of the horizontal stabilizer, which could be from the MCAS.” The remedy for the problem requires the crew to disable the MCAS and apply appropriate pitch trim inputs.

The flight data recorders from the Ethiopian Airlines Boeing 737 have been recovered, but investigators have yet to review the information they contain. What is known about the crash is that the pilots of the jetliner reported difficulties and asked to return to Addis Ababa minutes after takeoff. Radar data shows an unstable flight path as the jetliner appears to have had difficulty climbing shortly after takeoff. The data shows its vertical speed fluctuating from a shallow climb to a sharper climb and then to a dive followed by a sharp climb before the airplane apparently went out of control and crashed.

Another focus of the inquiry into the crash will focus on the pilots’ qualifications and training, as well as maintenance practices at the airline. The investigation is being led by Ethiopian authorities in coordination with teams of experts from Boeing and the NTSB, which have arrived on scene in Ethiopia.

Goodyear Unveils Concept for a Tire that Doubles as a Propeller

Tilting tire is designed for flying cars of the perhaps not-so-distant future. 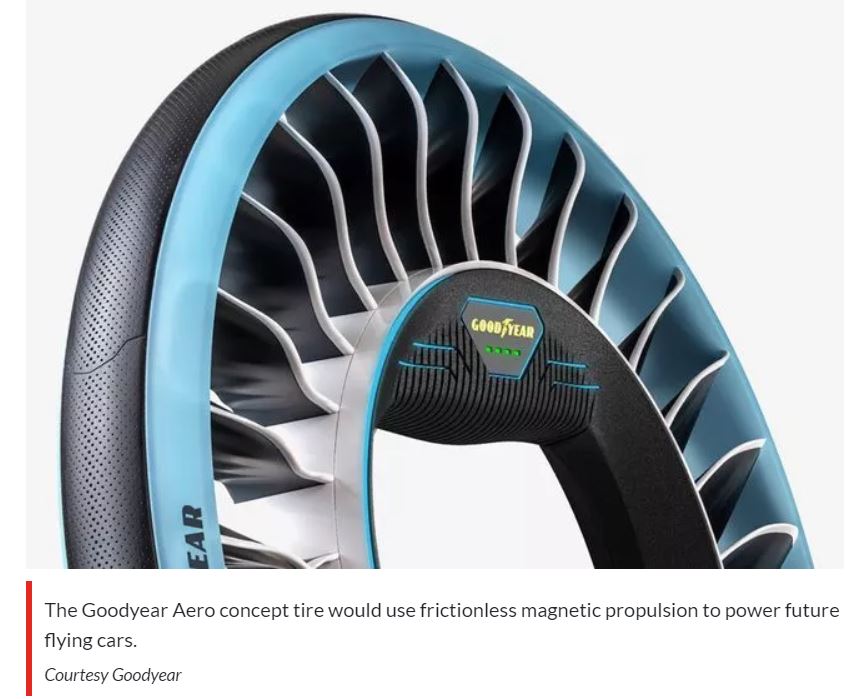 A tire that can morph into an aircraft propeller? Goodyear thinks it’s the perfect solution for autonomous flying cars of the future that would ride on the thin, airless tires, which could then pivot like a tiltrotor to provide propulsion as the wheel’s spokes double as fan blades.

The Goodyear Aero concept introduced this week at the Geneva Auto Show would use frictionless magnetic propulsion to function both as a tire for driving on the road and a “propeller” for flying through the sky. Promotional videos on YouTube show the tires tilting upward as a vehicle rises from the surface of a roadway.

“This unique airless tire uses a non-pneumatic structure that is flexible enough to dampen shocks when driving on the road and strong enough to rotate at the high speeds necessary for the rotors to create vertical lift,” the company said in a news release.

Goodyear says the design would include fiber-optic sensors to monitor road conditions, tire wear and structural integrity along with an embedded A.I. processor that would analyze vehicle data to allow for adaptions to flying or driving modes and identify and resolve potential tire-related issues.

The potentially deflating news for technophiles eagerly dreaming of a future in which flying cars become the preferred mode of urban transportation is that Goodyear admits the idea is purely conceptual and is intended merely to jumpstart a debate on the future of tire and transport technologies.