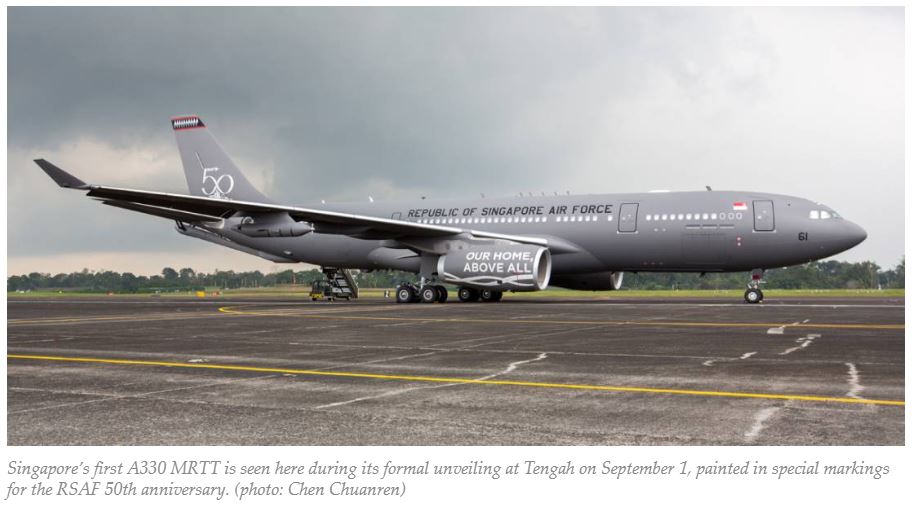 On September 1, the Republic of Singapore Air Force (RSAF) officially unveiled the Airbus A330 Multi Role Tanker Transport (MRTT) in conjunction with the annual RSAF Day. The A330 MRTT was revealed at the RSAF Day Parade held at Tengah air base, and the proceedings were officiated by the Singapore Prime Minister, Lee Hsien Loong.

The aircraft, however, had arrived in Singapore from Spain on August 14 into Changi Air Base (CAB) (East)—adjacent to the country’s main international airport—before embarking on training sorties around the island. Singapore ordered six A330 MRTTs in 2014 to replace four venerable Boeing KC-135R Stratotankers, some of which are more than 50 years old.

The RSAF A330 MRTT has a fuel load of 245,000 pounds and a cargo capacity of 82,000 pounds as well as 266 passengers. Despite the RSAF not operating any probe-equipped receivers, the aircraft is fitted with underwing hose and drogue refueling pods, allowing it to refuel aircraft from partner air forces or any future RSAF aircraft that are equipped with a refueling probe. It is also the first transport aircraft in Singapore to have its own air-to-air refueling capability via the Universal Aerial Refueling Receptacle Slipway Installation (UARRSI), giving it extended range and endurance for transport and tanking missions.

The arrival of the A330 MRTT into CAB (East) also suggests the “re-operationalization” of the air base. The air base and the third runway were temporarily closed a few years ago to facilitate land preparation work for the Changi Terminal 5 construction. No. 145 Squadron, which operates the Lockheed Martin F-16D+ Blk 52, was moved to Tengah as a result.

Both South Korea and France will also receive their first A330 MRTTs this year. AINunderstands that, currently, the French Air Force has A330 MRTT pilots training in Australia and the UK, allowing rapid entry of the type into service after delivery. South Korea and France have four and 14 aircraft on order, respectively. Currently, there are 29 aircraft serving with Australia, Saudi Arabia, the United Arab Emirates, and the United Kingdom, with 28 more on order.

New airplanes will be on display at the Lyon Air Museum.

Pilots and aircraft operators who are considering purchasing an airplane will have an opportunity this weekend to experience first-hand a large gathering of new airplane manufacturers and vendors at the Lyon Air Museum at the Salt Lake City International Airport (SLC).

The event will run from 10 a.m. to 4 p.m. PDT on Friday and Saturday, September 7 and 8. Aircraft manufacturers such as Textron Aviation, Piper, Quest, Honda Aircraft, Pilatus, Cub Crafters and more will be on hand to show off their airplanes. Visitors will be able to get detailed information and step into two-seat backcountry taildraggers and other piston-powered airplanes as well as turboprops and business jets.

In addition to taking a closer look at the airplanes, attendees can learn more about aircraft insurance, financing, tax concerns and more. An ownership conference will take place on Friday at 1 pm.

“Motec is an excellent acquisition. It has market leading positions across a number of high growth market applications and its vision systems nicely complement our existing instrumentation businesses by expanding our portfolio of

ofsolutions to our customers,” says David A. Zapico, AMETEK chairman and CEO.

Motec was a privately held company and is headquartered in Hadamar-Steinbach, Germany. The company has annual sales of approximately €30 million and joins AMETEK as part of its Electronic Instruments Group (EIG) – a leader in advanced analytical, monitoring, testing, calibrating and display instruments with annualized sales of $2.9 billion.