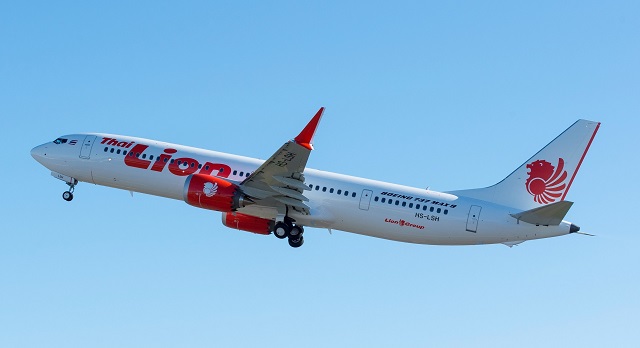 Ten months after handing over the first 737 Max 8, Boeing has now delivered the second major variant in re-engined single-aisle family with Thai Lion Air taking the first 737-9 in a 21 March ceremony in Renton, Washington.

The stretched single-aisle powered by CFM International Leap-1B engines completed a 10-month certification effort in January, clearing the way for the Lion Air subsidiary to accept the first aircraft from Boeing.

“The 737 has been the backbone of our business since we began and we will use the added capacity the airplane provides to expand our network and start additional routes to Bangladesh, China and India,” says Darsito Hendro Seputro, chief executive and chairman of Thai Lion Air.

Another Lion Air subsidiary, Malindo, took delivery of the first 737-8 and launched operations last May.

In addition to a stretched fuselage, the 737-9 includes the same package of upgrades that Boeing introduced with the Max family. To reduce fuel consumption, Boeing replaced the CFM56 on the 737NG family with the Leap-1B, added the dual-feather Advanced Technology winglet and resculpted the tail cone into a cleaner, circular shape.

“The Lion Air Group is the perfect example of how the 737 Max family provides a common fleet solution across the single-aisle spectrum,” says Boeing Commercial Airplanes president and chief executive Kevin McAllister.

The first delivery of the the 737-9 comes five days after the next major variant in the 737 Max family flew for the first time. The shortened 737-7 is scheduled to complete certification testing by the end of the year and enter service in 2019.