(CNN) — If time travelers from 1968 found themselves in an airport today, there might be plenty of changes that surprise them. But the planes would look reassuringly familiar.
While there have been vast improvements in materials, engines and avionics — helping 2017 become the safest year in aviation history — commercial aircraft remain structurally similar to those of the 1960s.
In fact, the Boeing 737, one of the best-selling airliners ever in its many successive versions, flew for the first time in 1967.
But what might air travel look like 50 years from now? 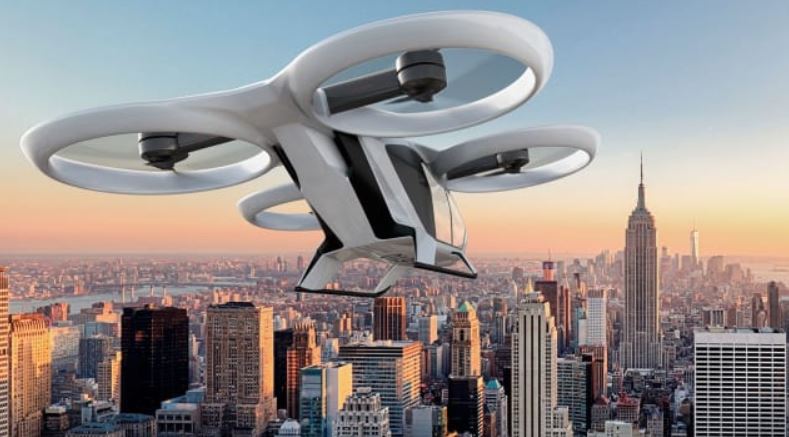 CityAirbus: A futuristic concept that Airbus is working on is CityAirbus, with a maiden flight scheduled for 2018. Just like Vahana, it’s self-piloted and will be able to take off and land vertically, making it ideally suited for urban use.

Attempts and failures
Over the years, there have been some attempts to change the aircraft design paradigm.
The 1970s promised a future of supersonic travel that never really took hold, apart from the limited flights of the Concorde and its Soviet equivalent, the Tu-144.
And, the idea of a blended wing airliner, resembling the stealth Northrop B-2 bomber, has sometimes been touted — but without much success so far.
A combination of technical and financial reasons has led the aviation industry to discard these rather outlandish propositions and focus on the more canonical designs that are the norm today.
Will the next 50 years continue along the slow, steady path of the last half-century? Or will we once again see the rapid technological disruption that characterized aviation in the years between the end of World War I and the Apollo moon landings?
Don’t be fooled by the apparent lack of spectacular breakthroughs. Some big changes are in the offing. 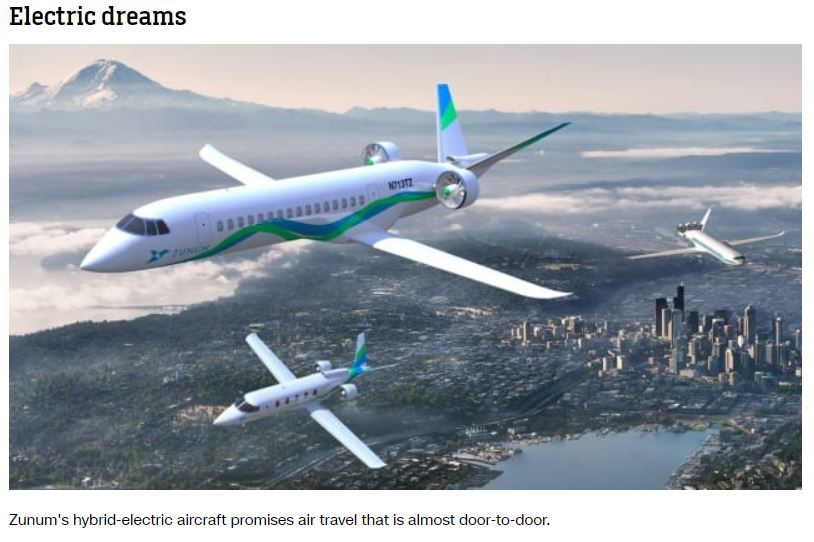 The airliner of 2068 is already in the making — and electric propulsion is set to play a major role.
Most short-haul flying is likely to go electric within the next few decades and this will transform the way we think of air travel.
Smaller electric motors will enable distributed propulsion, like the one found in NASA’s X-57 prototype. Lower noise levels and operational costs will make it possible for electrical-powered aircraft to fly much closer to where people live and work.
In fact, several of today’s most advanced electrical aircraft projects aim to not only replace ground transportation between cities — as with the nine-to-12 passenger Zunum and Eviation concepts aim to do — but within them.
Flying taxis will become a reality very soon, but it remains to be seen whether the futuristic-looking Vahana and CityAirbus concepts are really the face of things to come.
In any case, door-to-door flying is not the exclusive preserve of electrical aircraft.
Although not a new concept, the use of tilt-rotors — meaning aircraft can transition from vertical lift to fixed-wing configuration — has so far been confined pretty much to the US military.
However, Italian helicopter manufacturer Leonardo is now readying the commercial launch of a civilian model, the AW609, that if successful, could potentially transform executive and regional aviation.

Automation
Global air traffic has been increasing steadily for decades and now that there are all these new uses for aircraft, the question is: Who’s going to fly them?
“It is estimated that the global commercial aviation industry will need some 600,000 pilots in the next 20 years,” says Pascal Traverse, general manager for the Autonomy Thrust at Airbus.
Compare that to the approximately 200,000 pilots currently in service. This is one of the reasons automation will become more important,” he adds.
Suddenly, the idea of a pilotless airliner doesn’t sound so far-fetched.
Bjorn Fehrm, an independent industry aviation expert at Leeham News, refers to one- and half-pilot airplanes, a term some industry executives already use to refer to the latest generation of aircraft.
“Take this concept a bit further and, in a few years, with enough automation built in, you may really need just a ‘safety pilot’ to be there, in case something unexpected happens,” he explains.
A fully pilotless airliner isn’t envisaged in the foreseeable future.
“One of the main challenges is modeling the unknown unknowns. When the unexpected happens, a human pilot should be able to react or to draw analogies with similar situations and resolve it, but it is not so easy to teach a machine to take into account all that many variables,” says Traverse.

Airliner automation may not itself translate into changes in aircraft design.
However, some experts see in the combinations of all these new technologies an opportunity to redesign the passenger experience from scratch.
“The emergence of electrical aircraft will lead to new fuselage designs that can accommodate passenger needs much better,” says Victor Carlioz, founder with Matthew Cleary of ACLA Studio, a California-based design studio specializing in airline cabin design.
Could it be time for the tailless “flying wing” to make a comeback?
“One of the issues of the flying wing was actually the passenger experience,” explains Fehrm. “People would be seated in an amphitheater-style cabin, many abreast, and no windows.
In this set-up, people at the edges could eventually have felt dizzy every time the aircraft turned. As dizziness depends on your visual references, you may be able to solve this by projecting images into the cabin and changing the points of reference.”
Even if you are able to replicate the window-gazing experience, Carlioz still sees a strong case for keeping windows on aircraft. “Some futuristic concepts show windowless aircraft and, while there may be some structural benefits from getting rid of the windows, there is also another line of thought that says the opposite: having some point of communication with the outside improves the passenger experience”.
It’s not a coincidence that Boeing’s Dreamliner, its most modern clean sheet design, features large windows and that Airbus devised a cabin with transparent walls in the vision of the future it presented at the 2011 Paris Air Show.
The appeal of large windows has been taken one step further by Embraer in one of its executive jet designs. The Kyoto cabin, designed for its Lineage 1000E aircraft, features large panoramic windows running along most of the lateral walls of the cabin. 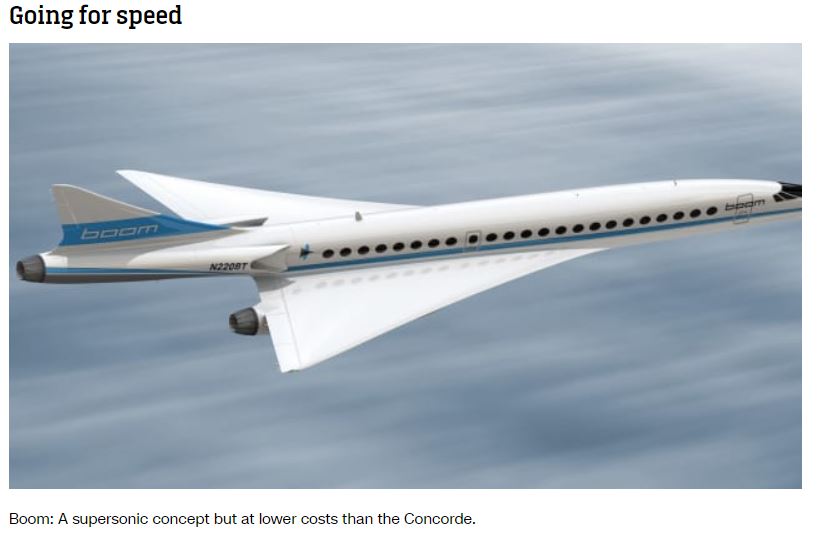 There is one area where it seems that commercial aviation has gone backwards instead of forward.
Back in the day, it was possible to fly supersonic across the Atlantic, but nowadays even those with the deepest pockets have to content themselves with subsonic speeds.
Some start-ups are working to fix this.
Boom Supersonic, a startup that has Silicon Valley incubator Y Combinator and Japan Airlines among its investors, is developing a commercial aircraft that will be expected to fly at speeds of Mach 2.2 with lower costs than the Concorde.
The Aerion AS2 is another civilian supersonic aircraft project, this one aimed at the executive market. Although it’s still under development, it already boasts a $2.4 billion order from fractional jet operator Flexjet for 20 of its AS2 planes, capable of flying at Mach 1.5.
But even those speeds pale next to the hypersonic speeds envisaged by some ambitious research programs.
The Spaceliner, a project led by DLR, the German Aerospace Research Institute, would travel at the edge of space in order to fly 25 times faster than the speed of sound. This way you would be able to travel from, let’s say London to Australia, in about 90 minutes.
“Very often in aerospace the challenge is not technological, but financial or operational,” says Rolf Henke, executive board member for aeronautics research at DLR, the German Aerospace Research Institute.
“Blended wings have already been talked about in the 1920s and hypersonic flight since the 1930s, but you need someone willing to take the risks and invest huge amounts of money.”
Source : CNN